Home About Us Our History 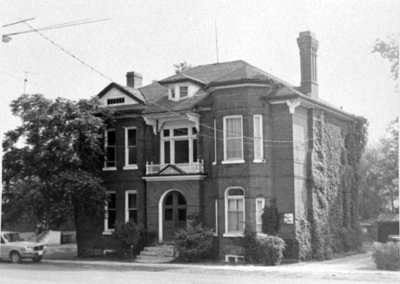 For two generations, Perry House Child Care Services has provided a home-away-from-home for children between the ages of 2 weeks to 12 years of age.

Established in 1976, Perry House has had an enduring presence in downtown Whitby. Even before its current use as a childcare service provider, our main house at 129 Perry Street has a long history in the community stretching back over 120 years. The building is listed on the Town of Whitby Official Heritage Register – Inventory of Listed Properties.

A look back into the history of the building and the people who lived here reveals that our ‘House’ has long been a place of care.

Built in 1889-90, 129 Perry Street was the home of Dr. William Octavius Eastwood, his wife Margaret Grace (Brown) and their children.

Born at Todmorden Mills, Toronto, Dr. Eastwood was a long-serving physician in the Whitby community. His obituary in the Whitby Gazette and Chronicle remarked that, “For over fifty years, he has been a practitioner here, and enjoyed a very large practice. He helped hundreds into the world, and was the hope and comfort of multitudes in the hour of sickness or suffering.”

A graduate of the University of Toronto (BA 1849, MD 1853), in the 1850s, Dr. Eastwood commenced his practice in the Manchester, Prince Albert and Port Perry area. Part of his regular routine was to travel by boat from the mainland to tend to patients on Scugog Island. In 1856 a floating bridge was built between Port Perry and the Island and Dr. Eastwood is said to have been the first person to cross that bridge.

In the 1860s, Dr. Eastwood moved to Whitby and developed a large practice here. He also served as a coroner for the Town and the Township of Whitby.

Eastwood was also a published researcher, having an article in the world-renowned British journal The Lancet [see On Two Cases of a Fracture of the Base of the Cranium (October 24, 1857)].

According the book Doctors of Ontario County, Dr. Eastwood was the Superintendent for Whitby schools in 1857.

Dr. Eastwood was also the uncle of Alice Eastwood, who spent time with the family after the death of her mother. Young Alice was inspired by Dr. Eastwood’s love of horticulture and went on to become one of the world’s leading botanists.

Alice was born to Colin Skinner Eastwood and Eliza Jane Gowdey in Toronto in 1859.

At the age of six, Alice’s mother passed away and when her father began to suffer financial troubles, Alice and her siblings were taken in by relatives. For a time, Alice lived with Dr. W.O. Eastwood and his family. Dr. Eastwood was an avid gardener and amateur botanist, and from him she began to learn the scientific names of plants. At the age of eight, Alice and her sister came to stay at the Oshawa Convent School (now St. Joseph’s) close to Whitby. One of the priest at the school was an amateur botanist, who helped to foster Alice’s interest. As a teenager, she rejoined her father in Denver, Colorado.

By the time of her retirement in 1949 at the age of 90, the Herbarium contained over 350,000 specimens and Eastwood had over 300 publications to her name. She also served as an editor of the journals Zoe and Erythea, and co-founded the publication Leaflets of Western Botany.

Alice Eastwood died in San Francisco in 1953 at the age of 94, and she is remembered as an inspiring scholar and tireless advocate of Western botany.

For more information about Alice: